Disorders of the enteric nervous system — a holistic view

The enteric nervous system (ENS) is the largest division of the peripheral nervous system and closely resembles components and functions of the central nervous system. Although the central role of the ENS in congenital enteric neuropathic disorders, including Hirschsprung disease and inflammatory and functional bowel diseases, is well acknowledged, its role in systemic diseases is less understood. Evidence of a disordered ENS has accumulated in neurodegenerative diseases ranging from amyotrophic lateral sclerosis, Alzheimer disease and multiple sclerosis to Parkinson disease as well as neurodevelopmental disorders such as autism. The ENS is a key modulator of gut barrier function and a regulator of enteric homeostasis. A ‘leaky gut’ represents the gateway for bacterial and toxin translocation that might initiate downstream processes. Data indicate that changes in the gut microbiome acting in concert with the individual genetic background can modify the ENS, central nervous system and the immune system, impair barrier function, and contribute to various disorders such as irritable bowel syndrome, inflammatory bowel disease or neurodegeneration. Here, we summarize the current knowledge on the role of the ENS in gastrointestinal and systemic diseases, highlighting its interaction with various key players involved in shaping the phenotypes. Finally, current flaws and pitfalls related to ENS research in addition to future perspectives are also addressed. 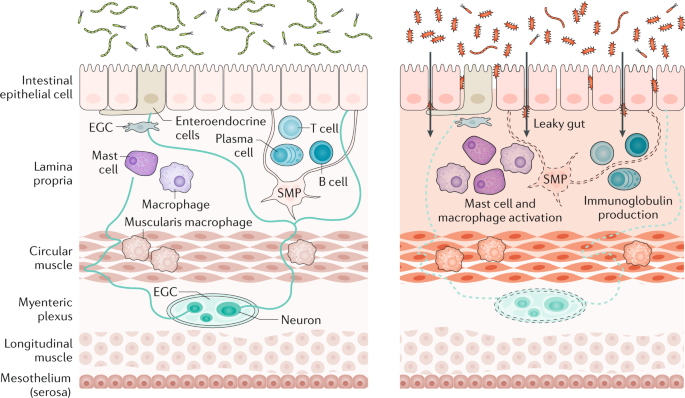