Diagnosis and Treatment of Irritable Bowel Syndrome. A Review

Importance  The prevalence of irritable bowel syndrome (IBS) in the United States is between 7% and 16%, most common in women and young people, with annual direct costs estimated at more than $1 billion dollars in the United States. Traditionally, the diagnosis of IBS has been based on the positive identification of symptoms that correlate with several different syndromes associated with disorders such as IBS diarrhea, IBS constipation, functional diarrhea, functional constipation, chronic functional abdominal pain, or bloating. Several peripheral and central mechanisms initiate gastrointestinal motor and sensory dysfunctions leading to IBS symptoms. Those dysfunctions may require evaluation in patients whose symptoms do not respond to first-line treatments.

Observations  Validation studies of consensus symptom-based criteria have identified deficiencies that favor a simpler identification of the predominant symptoms of abdominal pain, bowel dysfunction, and bloating and exclusion of alarm symptoms such as unintentional weight loss, rectal bleeding, or recent change in bowel function. Symptom-based diagnosis of IBS is enhanced with additional history for symptoms of somatoform and psychological disorders and alarm symptoms, physical examination including digital rectal examination, and screening tests to exclude organic disease (by measuring hemoglobin and C-reactive protein concentrations). The initial treatment plan should include patient education, reassurance, and first-line treatments such as fiber and osmotic laxatives for constipation, opioids for diarrhea, antispasmodics for pain and for management of associated psychological disorders. For patients who do not respond to those IBS treatments, testing for specific functional disorders may be required in a minority of patients with IBS. These disorders include rectal evacuation disorder, abnormal colonic transit, and bile acid diarrhea. Their identification is followed by individualized treatment, such as pelvic floor retraining for rectal evacuation disorders, sequestrants for bile acid diarrhea, and secretory agents for constipation, although there is only limited evidence that this individualized management approach is effective.

Conclusions and Relevance  Advances in the identification of specific dysfunctions as causes of individual symptoms in the “IBS spectrum” leads to the potential to enhance the diagnosis and management of symptoms for the majority of patients for whom first-line therapies of IBS and management of comorbid psychological disorders are insufficient. 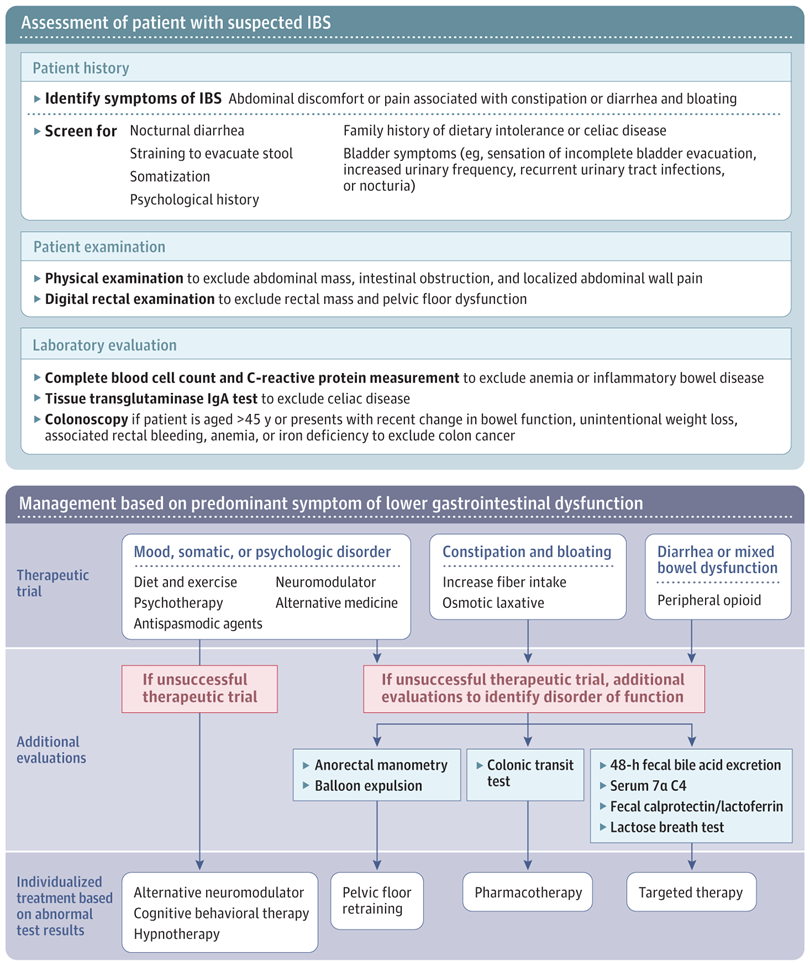