The tangled history of mRNA vaccines

Hundreds of scientists had worked on mRNA vaccines for decades before the coronavirus pandemic brought a breakthrough.

In late 1987, Robert Malone performed a landmark experiment. He mixed strands of messenger RNA with droplets of fat, to create a kind of molecular stew. Human cells bathed in this genetic gumbo absorbed the mRNA, and began producing proteins from it1.

Realizing that this discovery might have far-reaching potential in medicine, Malone, a graduate student at the Salk Institute for Biological Studies in La Jolla, California, later jotted down some notes, which he signed and dated. If cells could create proteins from mRNA delivered into them, he wrote on 11 January 1988, it might be possible to “treat RNA as a drug”. Another member of the Salk lab signed the notes, too, for posterity. Later that year, Malone’s experiments showed that frog embryos absorbed such mRNA2. It was the first time anyone had used fatty droplets to ease mRNA’s passage into a living organism.

Those experiments were a stepping stone towards two of the most important and profitable vaccines in history: the mRNA-based COVID-19 vaccines given to hundreds of millions of people around the world. Global sales of these are expected to top US$50 billion in 2021 alone.

But the path to success was not direct. For many years after Malone’s experiments, which themselves had drawn on the work of other researchers, mRNA was seen as too unstable and expensive to be used as a drug or a vaccine. Dozens of academic labs and companies worked on the idea, struggling with finding the right formula of fats and nucleic acids — the building blocks of mRNA vaccines.

Today’s mRNA jabs have innovations that were invented years after Malone’s time in the lab, including chemically modified RNA and different types of fat bubble to ferry them into cells (see ‘Inside an mRNA COVID vaccine’). Still, Malone, who calls himself the “inventor of mRNA vaccines”, thinks his work hasn’t been given enough credit. “I’ve been written out of history,” he told Nature. 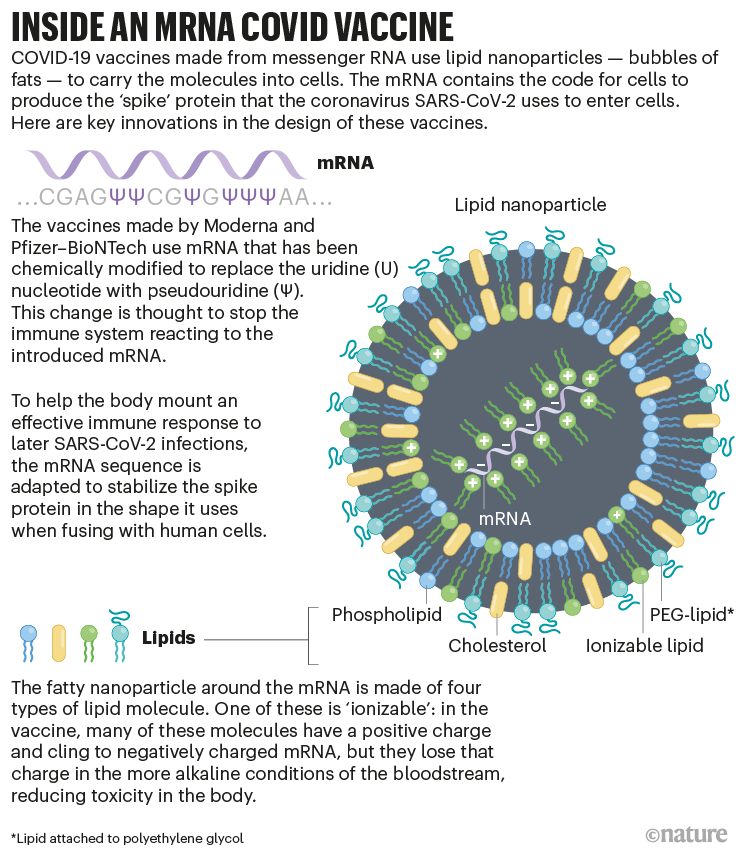