You are here:
Finding clues in unexpected places: detection of pancreatic cancer through the faecal microbiome
Rachel Newsome AND Christian Jobin

Pancreatic cancer is an intractable form of cancer that ranks as the 12th most common cancer worldwide (2.7%) but alarmingly is predicted to increase in the next two decades.1 Pancreatic ductal adenocarcinoma (PDAC) is the most common form of pancreatic cancer with a low survival prognosis (~5%). The pancreas is located next to major blood vessels which facilitates nutrient acquisition and spreading, meaning PDAC can progress quickly, and symptoms are often associated with other risk factors and comorbidities in these patients, including chronic pancreatitis (CP) and diabetes.2 Clearly, early detection is an essential component of improving survival, however, limited progress has been made in PDAC early diagnosis. Current detection methods include imaging, biopsy and sampling of urine and serum of patients to monitor progression. There is an urgent need to identify novel and preferentially non-invasive early markers of pancreatic cancer. The finding that microbiota is associated with various forms of cancer including pancreatic cancer has ignited interest among the scientific community in using microbiota for predictive, diagnostic and prognostic purposes.3 4

In Gut, Kartal, Schmidt and Molina-Montes sought to identify microbial predictive signatures of PDAC using oral and intestinal microbiota.5 The authors sampled saliva and faeces as well as pancreatic normal and tumour tissue from patients with PDAC and CP, along with matched same-hospital inpatient controls (figure 1). Microbial composition was assessed in each sample type via whole-genome shotgun metagenomics and 16S rRNA sequencing. The authors collected numerous metadata for these subjects, many previously having been associated with altering the microbiome, all of which were assessed for residual effects on microbial richness (diversity) independent of disease state (PDAC vs CP vs normal). Subject disease state was significantly associated only with different microbial composition in faeces, not saliva or any metadata variable. 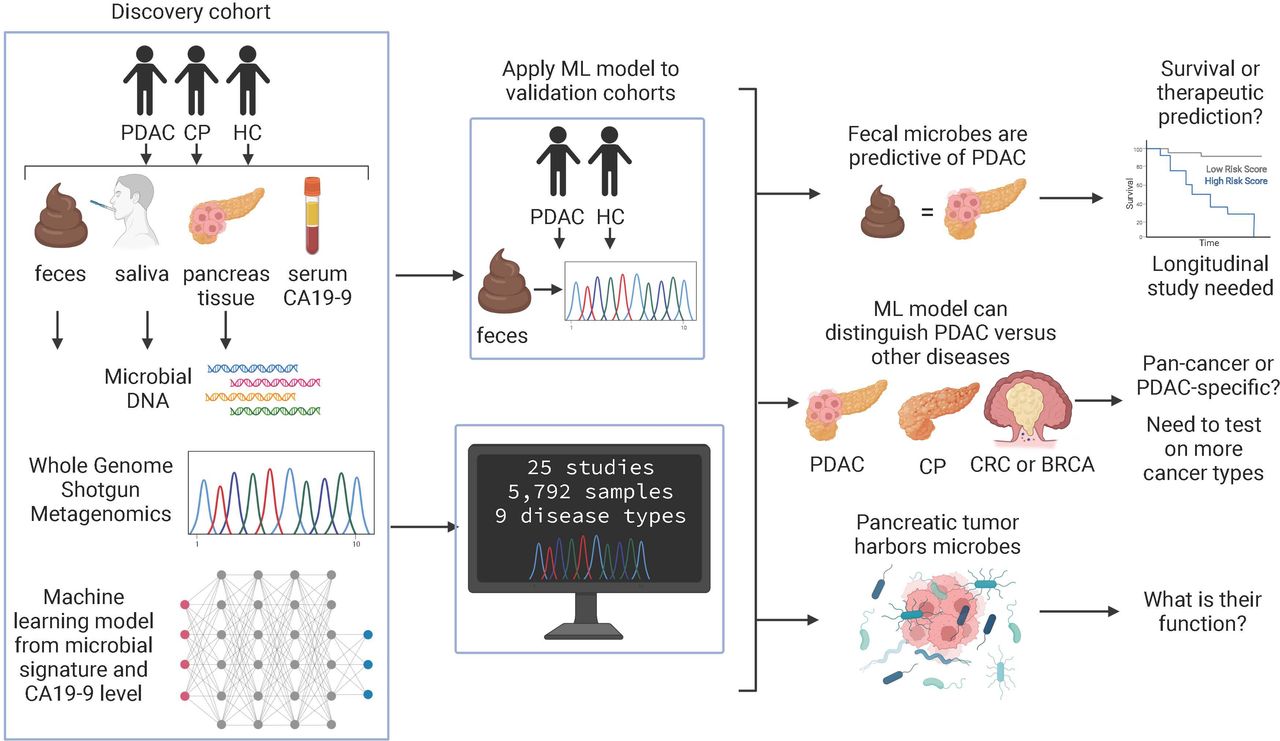